Almond Milk and other Dairy Alternatives 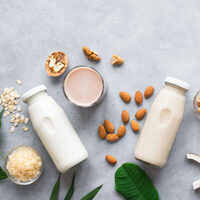 Choosing the best alternative to dairy milk. Unsweetened almond milk is actually lower in calories than all cows milk varieties, including skimmed milk. It is low in carbohydrates, i and its the keto milk of choice.

Almond milk still makes up around two-thirds of all plant milks sold, and remains one of the top choices for fans of homemade nut milk. The popularity of dairy alternatives continues to grow.

Choosing the best alternative to dairy milk is a personal decision that will depend on a number of factors. Some choose non-dairy milk as part of a vegan diet. Others choose plant milk because of environmental concerns yet do not follow an entirely plant-based diet. In fact, 90% of plant milk buyers still buy other dairy products. Some people are lactose intolerant whilst others simply prefer the taste of dairy alternatives.

There may be several situations in which you may wish to switch out dairy for a non-dairy alternative yet it often begins with deciding which alt-milk to order in your morning flat white.

The rise of alt-milks

Alternatives to dairy milk were once only found in dusty health food shops frequented by hard core wholefood fanatics. Now, everybody is ditching dairy and opting for plant-based milks instead. Despite the growing popularity of veganism, the demand for alt-milks is created in coffee shops where even the most ardent of meat eaters seems to prefer their latte to be oat based.

Alt-milks were eventually promoted from the health store to the supermarket, but it was not until they were re-formulated to take space in the chiller aisle that interest really began to take hold.

There are now many types of non-dairy milk available, in both shelf-stable and refrigerated versions. The standard was once soy milk, yet concerns over genetically modified crops were partially to blame for its fall from grace. Some remain devoted to soy milk, yet almond milk became the standard alt-milk for some time. Until oat milk came along.

Many people choose a wide variety of alt-milks, choosing them by their suitability for the job in hand rather than showing loyalty for one particular type.

What is the most sustainable non-dairy milk?

All non-dairy milks have a much smaller carbon footprint than their dairy counterparts. The major concern with oat milk is the amount of land required to grow vast crops of oats. Almond milk raises concern over the amount of water used in the intensive farming of almonds. Yet it still has a marginally lower carbon footprint than oat milk. Luckily, all of our Australian almonds are pesticide-free and grown with minimal intervention. That includes more sustainable uses of water.

Unsweetened almond milk is lower in calories than all cows milk, including skimmed milk. Low in carbohydrate, it is the keto milk of choice. It is higher in fat than skim and semi cows milk, but lower than in whole milk. Bear in mind that the fat in almonds is healthier than the saturated fat found in dairy.

Most commercial non-dairy milks are supplemented with calcium and vitamin D.

Oat and almond have become the two major players in the alt-milk game. Oat milk is sweet and creamy, although the commercial varieties may still contain thickeners and additives.

Commercial almond milk can be thin and watery with very little actual almond content. It does have significant vitamin E content, whilst oat milk does not. It is also gluten-free. You can read more about the full story on the gluten content of oats here.

Oat milk, however, is lower in fat, with more protein and fibre than almond.

Essentially all alt-milks are a product, including commercial almond milk, that bear little or no relation to homemade nut milk.

Homemade almond milk is thick and creamy, and the only additives it contains are the ones you choose to put there. Almond milk is made from nuts and water, and the further away it gets from homemade the more things are likely to be added to that equation. Commercial almond milk is likely to have more sugars, additives and thickeners in it than it does almonds.

Almond milk that you make yourself will be creamy, and taste of nuts. Buying your almonds in bulk to make your own almond milk offsets the cost. As your homemade almond milk contains more nuts, it also has a much higher nutritional value. Especially if you use the almond pulp to make almond flour for your gluten-free bakes.

Btw, what is the best non-dairy milk for coffee?

Many alt-milks don't perform well in hot drinks as they have a tendency to split at high temperatures. Plant proteins just don not foam like cows milk can. This is why most cafes choose commercial brands created for barista use. When it comes to making truly lovely barista style coffee, oat milk is gaining on the popular Almond milk.

Explore our pesticide-free Australian almonds and don't forget that you can buy almonds in bulk at wholesale prices.