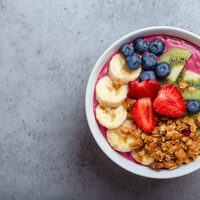 Six of the best acai bowl ingredients. Boost your bowl with superfoods. Why soy sauce just might be the greatest seasoning. Ever.

All About Soy Sauces No oats are actually gluten free even though it is a very low level. Oats is technically not safe for coeliacs, even if it not contaminated by other grains, and despite a lower impact on gut sensitivity than other grains, no oats are gluten free.

Oats is an important and unique cereal grain for its nutrition and low GI qualities (see the difference in basic plant structure in the image below). Oats is low in gluten proteins, but it is not gluten free. Gluten is a prolamin protein fraction that can severely effect people with Coeliac disease. It is called secalin in rye, hordein in barley, gliadin in wheat, and it’s avenin in oats. Oats contains the protein avenin, a gluten protein. Avenins are tolerated by most celiacs.

Scientific research shows that proteins in oats do cause some inflammation and damage in patients with gluten sensitivity so its not safe for a coeliac. Although Avenins are non-toxic and are tolerated by most celiacs.

In USA, UK and EU foods that contain less than 20ppm of gluten proteins can legally be labelled as ‘gluten-free’, however in Australia it must be less than 5ppm, a test that oats cannot pass. So, advertising oats as ‘gluten-free’, including foreign manufactured products that may be legal (although misleading) in other countries, in Australia is simply flaunting the law.

No oats are actually gluten free even though it is a very low level. Oats is technically not safe for coeliacs, even if it has not been contaminated by other grains, and despite the lower impact on gut sensitivity than other grains, no oats sold in Australia should be labelled gluten free.

Fortunately only a very small portion of the population are coeliacs (less than 1%) and normal healthy people should NOT be eating gluten free products as a fad, because they miss high quality nutrient rich foods.